The official transfer of new ASCs was organized by UNDP under the UN Recovery and Peacebuilding Programme (UN RPP) with financial support from the European Union.

The official handover ceremony was led by Dr Annika Weidemann, the deputy head of the EU Delegation to Ukraine, Segiy Haiday, the head of Luhansk Oblast State Administration, Yuriy Prokolenko, the mayor of Kremina, Eduard Oleynikov, the head of Bilovodsk ATC and Victor Munteanu, the manager of the UN Recovery and Peacebuilding Programme.

The high-quality and timely provision of administrative and social services is at the core of decentralization reform. Along with our partners, UNDP under the UN Recovery and Peacubulding Programme fully supports the reform, and is steadily working on widening the territories covered by service provision so that more citizens can access them without wasting time and resources.

The new mobile ASCs handed over to Kremina and Bilovodsk ATCs are vehicles that can provide local populations all kinds of administrative and social services practically identical to those available at stationary centres. The key aim is to bring services to people whose location is far from the stationary centres and to those living close to and along the “contact line”.

The vehicles have two working spaces for administrators, both equipped with computers and modern software, two mobile cases – one for providing administrative services and another for carrying out energy audits. The vehicles also have security cameras, GPS-navigation, heating system, ventilation, air conditioning and portable access ramps. The mobile ASCs are also equipped with remote working spaces for specialists from the pension fund, lawyers, social security and other services.

“These two brand-new mobile ACSs for Luhansk Oblast are only the start,” stressed Victor Munteanu, the manager of the UN Recovery and Peacebuilding Programme. “Soon, we will be handing over two more mobile ACS for Donetsk Oblast. And next year we’ll launch ten more offices to render administrative and social services that will have even more capacities to help population of both Donetsk and Luhansk oblasts.”

The overall cost, including all of the equipment and training for the specialists, is US$110,000.

“It’s not the first time I’m visiting Luhansk Oblast: Last year, at the same time, I was in Kreminna, where I visited the local Administrative Services Centre (ASC) – one of 10 that we opened in Luhansk Oblast,” said Dr Annika Weidemann, Deputy Head of the EU Delegation to Ukraine.

“Today, we’re transferring the first two mobile ASCs to local communities, and these mobile units will join our administrative services providers’ network in a brand-new format, supporting citizens with administrative and social services even in the most rural areas of Luhansk Oblast. They will also be useful for serving people with limited mobility.

“I also want to mention that the new mobile ASCs are fully equipped with all the needed technologies, including mobile internet, and databases for proper administrative services provision. All personnel are well trained.

“At the same time, I want to thank our partner, UNDP, which is helping us to implement these activities in the east of Ukraine. I hope that people in Luhansk Oblast will be happy with the new mobile ASCs and feel they are supported by EU citizens.”

The new mobile ASCs not only will cover a wider territory and provide even more services for the people of Kremina and Bilovodsk ATCs — they will also create an integrated system to render administrative services in eastern Ukraine.

The UN Recovery and Peacebuilding Programme is being implemented by four UN agencies: The United Nations Development Program (UNDP), the UN Entity for Gender Equality and Women's Empowerment (UN Women), the UN Population Fund (UNFPA), and the UN Food and Agriculture Organization (FAO). The programme is supported by 11 international partners: the European Union, the European Investment Bank, and the governments of the United Kingdom, Denmark, Canada, the Netherlands, Norway, Poland, Sweden, Switzerland and Japan. 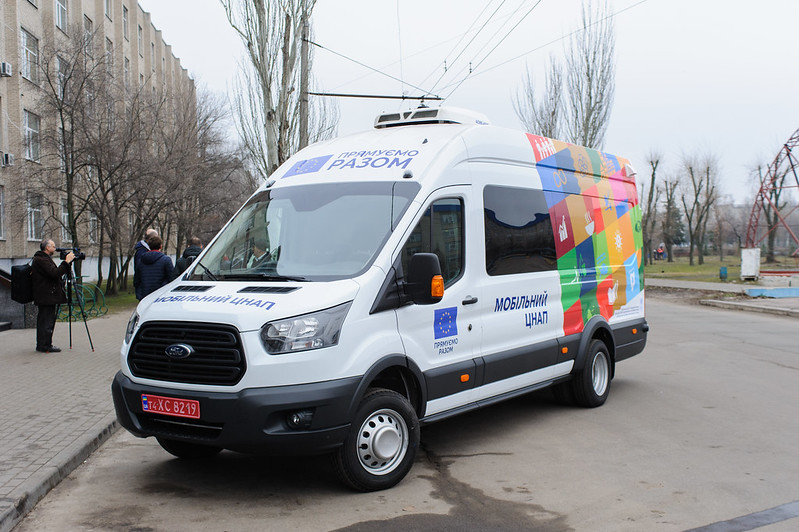