Kyiv, 9 September 2019 – Ukraine joined a 60-strong network of development think-tanks spanning 78 countries on Friday, with the launch by UNDP in Ukraine of the country’s new Accelerator Lab.

The new unit, which will be embedded in UNDP Ukraine’s country office, aims to use the latest approaches, such a big-data analysis and collective intelligence techniques, to target fast-moving development challenges.

Speaking at the launch event in the Ukrainian capital Kyiv, UNDP Resident Representative Dafina Gercheva said that: “the speed, dynamics and complexity of today’s  challenges are fundamentally different from those seen in previous eras of history. To address these complex and interrelated problems we need an agile, intelligent and collective response, a response which brings new approaches to identified solutions.”

“The Accelerator Labs are our response. This network of 60 Labs in 78 counties, including one in Ukraine, will allow UNDP to identify local innovations and help broaden their potential to accelerate development. “

A team of three experts at the lab will collate data, design experiments, and hunt down innovative solutions to development problems in Ukraine. The lab in Ukraine will also be able to tap into solutions discovered by other labs in other countries, bringing worldwide expertise to bear on Ukrainian problems.

In turn, successful solutions found in Ukraine that can be scaled up and globalized will be available for “export” to other labs in the global network, for use in their locations.

To achieve their “acceleration” the labs will design and conduct experiments around sets of solutions rather than individual solutions, enabling them to learn about what works and doesn’t in weeks or months, rather than years.

The launch event was attended by Davide La Cecilia, Ambassador of Italy in Ukraine, Hadi bin Nasser Mansour al-Hajri, Ambassador of the State of Qatar, Maximilian Wedekind, Embassy of Germany in Kyiv, representing those countries that have provided funding to set up the new global network of Accelerator Labs, as well as Laura Bill, UNICEF Ukraine Deputy Representative, the representatives from Ukraine’s Presidential Administration, Ukraine’s Parliament.

During the event attendees took part in some of the work that Ukraine’s Accelerator Lab will be doing in future – identifying the most urgent development issues facing the country, and mapping out possible solutions.

They worked in groups to co-create a positive vision of Ukraine in 2030, when all UN sustainable development goals have been achieved. They also applied backcasting methodology to define concrete actions connected to achieving their vision. This collective vision will serve as a guideline for the future work of the Ukraine’s Accelerator Lab.

Attendees also had the chance to do a bit of networking – another of the lab’s functions, as it seeks to build partnerships between local governments and communities, NGOs, businesses and the national authorities in addressing development challenges.

Background: The Accelerator Labs network was officially launched at UNDP on July 17 in New York.  The labs are supported by an initial $75 million, drawn from UNDP core resources as well as financing from Germany, Qatar, and Italy. 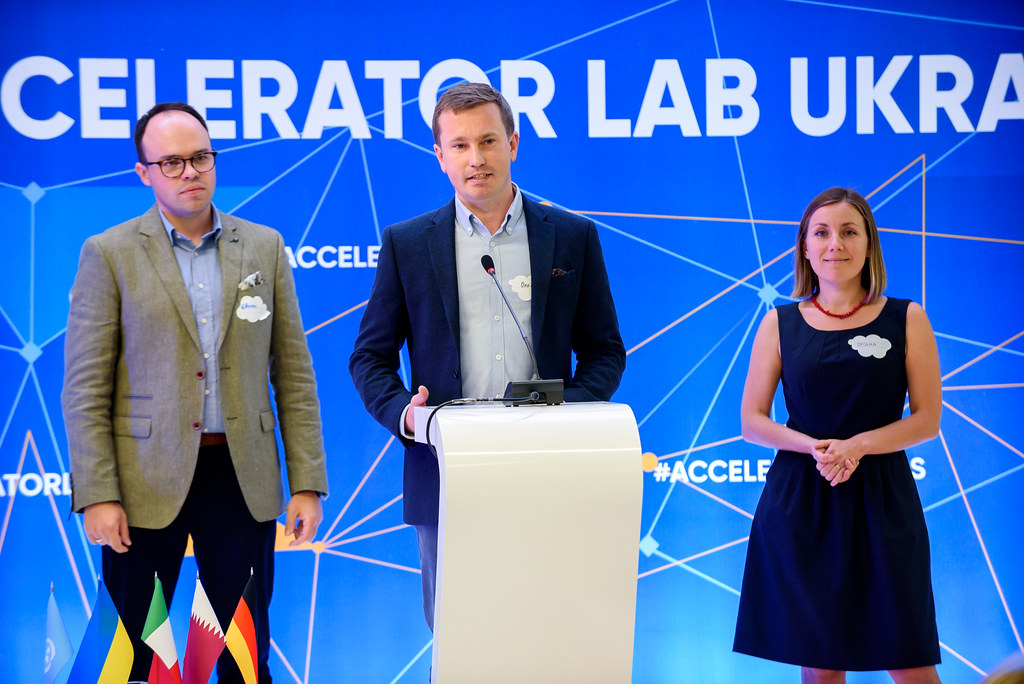