Prymorsk, Zaporizhzhia Oblast, 23 September 2021 – Representatives of the European Union and the UN Development Programme today joined more than 50 volunteers and activists to clean up the coastline on the Sea of Azov. The global initiative, part of the #EUBeachCleanup campaign, works to create awareness of the need to prevent garbage from reaching the ocean. The event is held every year in countries around the world.

Katarina Mathernová, Deputy Director-General for Neighbourhood Policy and Enlargement Negotiations at the European Commission, joined the cleanup in Prymorsk. “Loss of biodiversity is among the most burning issues of our times. It requires global action. This is why the EU’s Biodiversity strategy for 2030 is a core part of the European Green Deal. This is why yesterday, in our focused dialogue with Ukraine on the European Green Deal/Ukraine’s Green transition, we discussed how to accelerate the implementation of Ukraine’s environmental reforms as part of its green transformation. And this is why today, I am grateful to our partners from Prymorsk city and UNDP for joining us in today's Beach Clean Up.” said Deputy Director-General Mathernová. “Environment has been a top priority for our cooperation with Ukraine for many years. The EU continues supporting Ukraine on its path, including with our technical assistance which covers areas of waste management, integrated river basin management, water quality management and nature protection”.

UNDP Resident Representative to Ukraine Dafina Gercheva said she would like to see the campaign continue growing. “Through the collective action of individuals, we shall overcome the many environmental crises we are facing,” she said. “We are grateful to our European partners for their support and are convinced that by uniting our joint efforts, we will be able to protect the environment despite the many obstacles.”

Head of Prymorsk City Council Oleksandr Koshelevych thanked the guests from the European Union for joining this important event and for helping together with volunteers clean the beach from garbage. “We will continue to foster such important eco-initiatives in Prymorsk and hope that our example will inspire other communities to take care of the environment as well.”

Donetsk and Luhansk oblasts also are supporting local eco-cleaning activities, organized under the UN Recovery and Peacebuilding Programme with financial support of the European Union. Residents of the Illinivka community in Donetsk Oblast cleaned the beach area near one of the largest reservoirs in the Kleban-Byk Regional Landscape Park, and volunteers from the Starobilsk community in Luhansk Oblast cleaned up the area near the Aidar River, an important tributary of the Siverskyi Donets river.

Every year in September, the European Union organizes an ocean-activism and awareness-raising campaign – #EUBeachCleanup – with events around the world.  This year’s campaign is linked to the UN conference on biological diversity to take place next month in October, and is dedicated to protecting and celebrating the rich life of the ocean. Whilst the key to fighting marine litter is to stop it at the source – using less, recycling more – cleaning matters as well. For more information, visit the 2021 campaign page here. 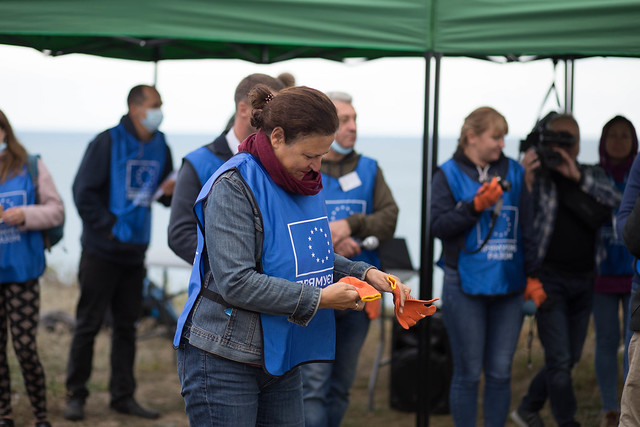