Kyiv, 25 May 2021 – Starting today, expectant mothers and their newborns in Zaporizhzhia Oblast will be able to benefit from a wide range of maternity services and a team of obstetricians, gynecologists, midwives, nurses, and other experts in women's and children's health at a newly upgraded and modernized maternity hospital.

UNDP Resident Representative Dafina Gercheva said the maternity hospital, which was first opened in 1945, is now a modern medical institution, providing medical care services to more than 5,000 patients a year, including to internally displaced persons (IDPs) affected by the ongoing armed conflict in eastern Ukraine and the temporary occupation of Autonomous Republic of Crimea and the city of Sevastopol.

“Facilities like this one are extremely important to achieving the third of 17 Sustainable Development Goals, which focuses on reducing the number of women who die in childbirth,” she said.  “It is unconscionable that globally, around 800 women die every day from preventable causes related to pregnancy and childbirth. This hospital demonstrates that Ukraine is moving in the right direction in turning this around.”

The overhaul was carried out under Ukraine’s Early Recovery Programme (UERP) with a loan from the European Investment Bank (EIB), and with the technical oversight of the United Nations Development Programme (UNDP) in Ukraine and local authorities. The total budget of the overhaul of the maternity hospital is UAH 63,150,000 (EIB – UAH 52.6 million, local authorities – UAH 10.5 million).

Roy Draycott, senior sector specialist of the regional development division at the European Investment Bank in Ukraine, said that Melitopol City Maternity Hospital is one of 246 projects renovated under the €200 million Ukraine Early Recovery Programme and one of 14 projects in Melitopol under this Programme. “Every renovated hospital, every school and every kindergarten are very special to us,” he said.  “And we hope this facility will become another significant contribution not just to the quality of lives and wellbeing of Melitopol’s residents but also to the future generations of Ukrainians.”

At the opening of the maternity hospital, Victor Munteanu, manager of the UN Recovery and Peacebuilding Programme, said that besides supporting the efficient implementation of Ukraine’s Early Recovery Programme, UNDP is taking a comprehensive approach to the recovery of the conflict affected regions. “UNDP is providing support to the Government and the people of Ukraine through economic development, local service provision and community security and social cohesion,” he said. “This comprehensive approach is an important prerequisite for building sustainable and resilient communities in the east of Ukraine.”

Ivan Lukerya, Deputy Minister for Communities and Territories Development of Ukraine, said the project is the fruit of decentralization reform, and demonstrates why this process is as an effective tool for local development. “There are two strategic objectives we managed to fulfil through the reform. Those are cohesion – partnership between the Government, regional and local authorities – and the creation of comfortable living conditions for each person regardless where they were born,” he said. “This maternity hospital is a bright example of such cohesion and partnership.”

The maternity hospital employs some 50 doctors and 136 midwives and nurses. The neonatal department provides assistance to newborns in complex neonatal cases and the neonatal intensive care units are fully equipped with modern equipment.

Ukraine Early Recovery Programme (UERP) covers nine oblasts of Ukraine and extends to the Ukrainian government-controlled areas in Donetsk and Luhansk oblasts and the adjacent Kharkiv, Dnipropetrovsk and Zaporizhzhia oblasts, and to city councils in other oblasts countrywide that host significant numbers of internally displaced people. The latter includes Kyiv Oblast (apart from the city of Kyiv), Odesa and Poltava oblasts, where more than 20,000 IDPs live, and Kherson Oblast, which hosts significant numbers of IDPs from the temporary occupied Autonomous Republic of Crimea and the city of Sevastopol.

The European Investment Bank (EIB) is the European Union's bank. It is a long-term lending institution of the EU and is the only bank owned by and representing the interests of the European Union Member States. The EIB has worked with Ukraine since 2007. Ukraine has been the main recipient country of EIB support in the Eastern Neighbourhood, accounting for more than 60% of EIB lending activity in this region. The Bank focuses on social and economic infrastructure, transport and connectivity, local private sector development, energy efficiency, climate action and innovation. Today, the EIB is one of the largest investors in Ukraine with signed projects of about €7 billion.

The United Nations Development Programme (UNDP) is the development arm of the United Nations. It has been working in Ukraine since 1993. Among other things, UNDP is helping to restore critically important social and economic infrastructure and the effective work of local governments in eastern Ukraine; creating jobs and spurring entrepreneurship among IDPs and host communities; and promoting peace and reconciliation. 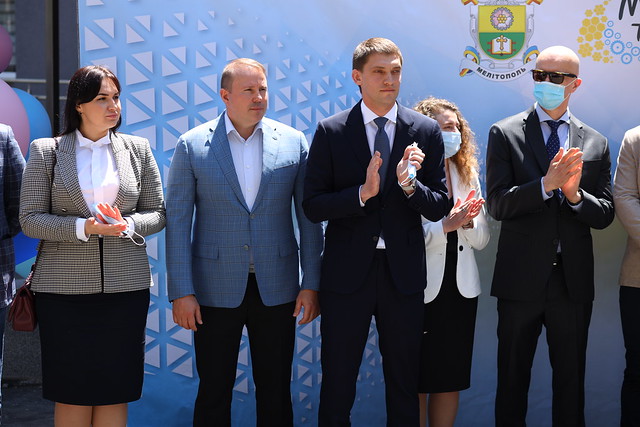