Newly repaired building in Dykanka is increased in capacity, and made more accessible and more heat efficient to render top-quality education to over a third of the settlement’s school-age children

Dykanka, Ukraine, 15 December 2021 – A school in Dykanka, Poltava Oblast has officially reopened after undergoing extensive renovation and modernization through a project launched under the Ukraine Early Recovery Programme.

The project was funded by the European Investment Bank (EIB), the long-term investment institution of the European Union. The programme has an EU grant-financed technical assistance component of €1.5 million and is implemented by the Ministry of Communities and Territories Development jointly with the local self-government bodies under the technical support of the United Nations Development Programme in Ukraine (UNDP).

The school, the M.V. Hohol educational complex located at 2A Shkilna Street in Dykanka, an urban-type village in Poltava Oblast, has had its capacity increased from 655 pupils to 900.

The school building underwent extensive repair work – the walls were heat insulated and the windows, doors and heating system were replaced. This will make the building more heat efficient and thus save budget funds on heating. Part of the roof was also replaced.

Access to the school was improved with the addition of an entry ramp and a lift.

A new electrical wiring system, water supply and fire sprinkler system, and lighting were installed. Interior finishing work on floors and ceilings was performed, along with exterior landscaping. New furniture for the school was also provided.

The renovation and modernization project at the school lasted from August 2020 to December 2021. The project budget was UAH 49.4 million (EUR 1.6 million). The EIB provided around UAH 42 million (EUR 1.4 million) of the project funding. Another UAH 7 million (EUR 230,000) was provided from the oblast and local budgets.

Chloe Allio, Head of the "Economic Cooperation, Energy, Infrastructure and Environment" Section at the EU Delegation to Ukraine, speaking at the ceremony marking the opening of the modernized school, praised the energy efficiency aspects of the project.

“The EU is happy to contribute to providing better access to education and learning conditions for these pupils and improved working conditions for school personnel. Thermal insulation, modern windows and doors, and a completely renovated heating system make this school fit for today’s greener times,” Allio said.

Roy Draycott, Senior Sector Specialist of the Regional Development Division at the Resident Representation of the European Investment Bank in Ukraine said the school modernization project exemplified what could be achieved in cooperation with the local authorities.

“The result of our partnership will be a better quality and more inclusive educational experience for more of the children of Dykanka,” Draycott said.

Poltava Oblast Governor Oleh Syniehubov thanked the international partners for their support: “We have demonstrated here what can be achieved with our cooperation,” he said. “This project represents and investment in the future – in the potential of children.”

UNDP Deputy Resident Representative to Ukraine Manal Fouani echoed Governor Syniehubov’s remarks, noting that the reconstruction of the school would provide a new quality of education and increase the social adaptation of young people.

“The school presently serves around a third of the school-age population of this community, but it has enough spare capacity to serve up to a half of the community’s children, including those with special educational needs,” Fouani said.

“This project thus represents an investment in the future of this community, foreseeing its growth and development.”

About the EIB: The European Investment Bank (EIB) is the long-term lending institution of the European Union, and is owned by EU member states. The bank provides access to long-term financing for prudent investment to implement European Union policies.

About the EIB in Ukraine: The EIB has been operating in Ukraine since 2007. Ukraine is the main recipient country for EIB investment among the Eastern Partnership countries, accounting for more than 60 percent of EIB lending in the region. The bank focuses on the areas of social and economic infrastructure, transport and communications, local private-sector development, energy efficiency, innovation and climate change. Today, the EIB is one of the largest investors in Ukraine, with a portfolio of loans and guarantees totalling more than EUR 7 billion.

About the Ukraine Early Recovery Programme: The Ukraine Early Recovery Programme is implemented in accordance with the Financing Agreement between Ukraine and the EIB. Through the programme, the EIB has provided EUR 200 million in multi-sectoral framework loans to local authorities to rehabilitate important utilities and transport infrastructure, and improve living conditions for internally displaced persons and their host communities. The programme operates in nine regions of Ukraine: The Ukrainian government-controlled areas of Donetsk and Luhansk regions, and Kharkiv, Dnipropetrovsk, Zaporizhia, Poltava, Odesa, Kherson, and Kyiv oblasts.

About UNDP in Ukraine: The United Nations Development Programme (UNDP) establishes partnerships with government, business, and communities, promoting the development of countries, increasing their ability to withstand crises, and supporting economic growth to improve the quality of life of all. In Ukraine, UNDP's work focuses on three program areas: inclusive development, reconstruction and peacebuilding; democratic governance; energy and environmental protection. Today, Ukraine has one of the largest UNDP programmes in Europe. 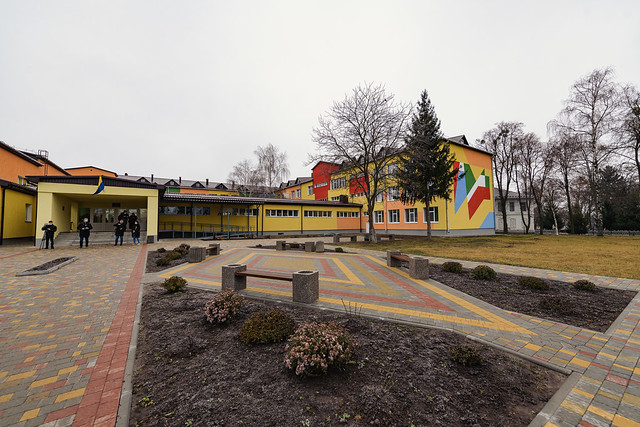