Kyiv, 19 May 2021 — The Diia Summit 2.0 for digital governance in Ukraine was held on 17-19 May, presenting the latest developments in Ukraine’s ambitious “State in a Smartphone” plan to make all government services available over the Internet by 2024. The event, also known as “eDay,” is organized every six months in Ukraine to ensure momentum towards full digitalization and universal access to e-services.

The three-day e-governance forum highlighted the latest advances and new features in the government’s “Diia” electronic services platform. UNDP provided organizational support for the event, with financial support from the the Swedish Embassy, among other partners.

President Volodymyr Zelenskyy said in his opening statement that it is obvious Ukraine has experience a digital revolution. “Before, you had to receive many permits and pay bribes. Nowadays, you have to pay for the internet only,” he said.  “Before – you went into ten offices; nowadays – you visit one website. Before – you had to present fifty certificates in queues; nowadays – you make three or four clicks in your smartphone. Before – you waited for weeks and months; nowadays you are done in ten to twenty minutes.”

The President also said there has been a rapid proliferation of electronic services amongst users: “Dozens of online services are launched on the Diia portal and in the app, with over 10 million Ukrainians already using them,” he said.

Following the President’s address, Vice President and Minister of Digital Transformation Mykhailo Fedorov unveiled the latest release of the government’s Diia mobile electronic service flagship application. Diia now has many additional features, including a new type of an electronic signature, and a feature that allows users to update their state-registered address – one of the most in-demand services in the country.

Describing new features of the Diia web portal, Mstyslav Banik, the team lead for Diia, highlighted a service that was developed with the support of UNDP in Ukraine through the Swedish-funded “Digital, Inclusive, Accessible: Support to Digitalisation of State Services in Ukraine (DIA Support)” Project. The new service enables internally displaced persons (IDPs) to apply to a subsidized mortgage programme administered by the State Fund for Support of Youth Housing Construction. It is expected to benefit at least 680 households.

Commenting on the new service, UNDP Resident Representative in Ukraine Dafina Gercheva said it was example of the UN agency’s core objective of ensuring all have equal access to state services. “Our task is both to support more electronic services and to increase the number of users,” Gercheva said. “UNDP is working with its partners to increase accessibility and remove barriers to the use of these services. Our core priority is digital transformation that leaves no one behind on the new digital highways.”

Tobias Thyberg, Ambassador of Sweden to Ukraine, said that Sweden is supporting Ukraine in promoting human rights and democratic processes, as well as fostering inclusive economic growth and environmental protection. “We believe that digital transformation based on personal data integrity and due protection from cyber threats can catalyze Ukraine’s progress in these areas. We are glad to partner with UNDP and the Ministry for Digital Transformation of Ukraine to advance an inclusive digital transformation agenda,” Thyberg  said.

UNDP Ukraine’s Deputy Resident Representative Manal Fouani also participated in Day 3 of the Summit in a panel discussion called Educational trends, digitalization and removal of barriers: Ukrainian success stories.  She presented the vision behind UNDP Ukraine’s broad approach to electronic service accessibility and emphasized the 3L approach, Listen, Learn and Leverage, which involves “listening to the people we serve, learning about their needs and then leveraging digital solutions to enable inclusive and equal access to public services.”

As the DIA Support project, which was launched in January this year, moves from its startup phase to full-scale operations, UNDP and its partners at the Ministry of Digital Transformation will identify priority electronic services for citizen groups that require special attention from the state. The team also intends in the upcoming months to update national regulations, aligning them with Web Content Accessibility Guidelines (WCAG) 2.1. This will ensure the Ukrainian authorities are able to design their web-based services in a more accessible way.

The electronic application service for the IDP subsidised mortgage programme was developed as part of the UNDP “Digital, Inclusive, Accessible: Support to Digitalisation of State Services in Ukraine (DIA Support)” Project, which is funded by the Embassy of Sweden in Ukraine. The three-year project aims to help bridge digital divides often experienced bty vulnerable social groups in Ukraine, such as the elderly and retirees, people with disabilities, those living below the poverty line, rural residents, young people in conflict-affected areas, distinctive ethnic groups (such as the Roma population), the internally displaced, and veterans returning to civil life. 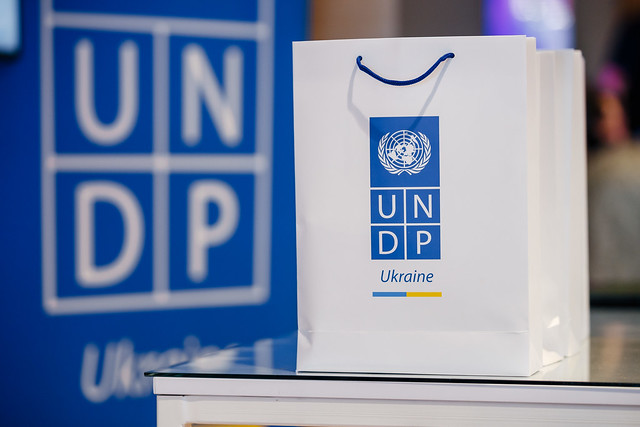