The introduction of mandatory electronic asset declarations for public officials has opened a new page in the history of Ukraine, revealing new details about the wealth of top government officials and politicians. However, managing conflicts of interest has not yet became a daily routine for government leaders. That's even more true for local officials, who do not receive round-the-clock attention from the national media, while local civic activists are only beginning to understand the new role they can play in the fight against corruption. In such conditions, some local officials, either unknowingly or deliberately, have not yet realized what the new rules imply.

In order to step up anti-corruption initiatives at the local level, the Odesa team of the Committee of Voters of Ukraine (CVU) set an ambitious goal: checking whether local heads of rayon state administrations and mayors, who filed electronic declarations in 2016, performed their new duty properly.

"We decided that under those circumstances, when the further development of the country depends on reducing corruption, the synergy among anti-corruption actors at all levels plays a great role," says Anatoliy Boyko, a head of CVU’s branch in Odesa.

Under the framework of the UNDP-supported initiative "For integrity among officials and transparency of decisions in Odesa oblast", CVU’s Odesa team scrutinised information provided by 26 heads of rayon state administrations and 7 mayors in their e-declarations, and found out whether local officials applied correctly the existing procedures to manage conflicts of interest in decision-making. As a result of this monitoring, the National Anti-Corruption Bureau of Ukraine (NABU) and the National Agency on Corruption Prevention (NACP) received reports of possible violations, while all rayon state administrations and city mayors got recommendations on taking extra measures to prevent conflicts of interest in decision-making.

The results were not long in coming. In early 2017, based on CVU’s complaints, NABU announced the beginning of the pre-trial investigation of two heads of rayon state administrations, while NACP started checking another two officials. Moreover, one case on violations of the financial control rules by a mayor is already pending before the court.

The team shared their experience with the public, disseminating a handy memo on checking officials’ electronic declarations and creating interactive graphs that show private ties between 33 local heads of rayon state administrations and mayors.

Setting up an anti-corruption agenda for the collective action

CVU’s Odesa team was among 40 local anti-corruption civic initiatives supported by UNDP with seed funding over a 2-year period. Through their own projects, activists are working on monitoring public procurement, tracking down possible corruption in real estate, verifying officials’ asset declarations and monitoring their lifestyle, preventing conflicts of interest in decision-making, using advocacy to promote their findings and bring about systemic change, just to name a few.

With UNDP support, these local CSOs produced significant results. Scrutinizing data about public procurement, one of the local partners had UAH 30 million worth of dubious public procurement contracts cancelled, bringing about five criminal cases. Another partner got hold of 35 asset declarations of oblast council members, after numerous appeals. A third partner crowdsourced claims from local citizens regarding allegedly illegal construction works, with analysis on some citizens’ whistleblower reports.

Since 2015, UNDP has equipped 60 civic activists, journalists, and community movers and shakers with knowledge and tools for tackling corruption on the ground. In April 2017, UNDP kicks off its third annual Anti-Corruption School, offering exposure to the best practitioners in the national transparency and integrity arena for young, ambitious CSOs and newly-formed initiative groups. As a result of this 3-day training, the best civic watchdog groups’ ideas will be supported by UNDP with seed funding, to continue anti-corruption initiatives at the local level. 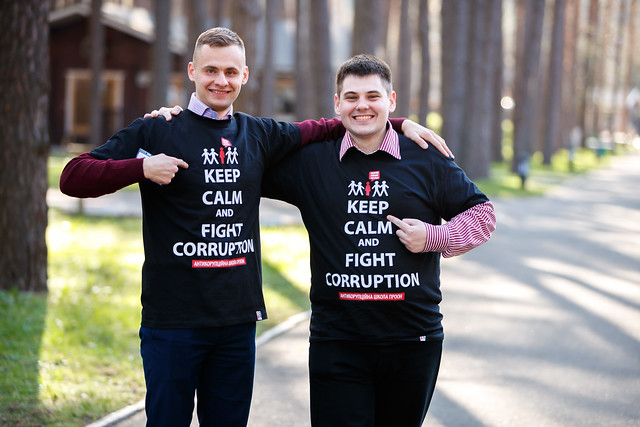