On September 25-26, 2019, two kindergartens and two hospitals opened in Melitopol and Prymorsk in Zaporizhizhia Oblast and Mariupol in Donetsk Oblast after large-scale renovation and modernization work. The renovation of the buildings, which will serve some 460,000 people, including internally displaced persons, was made possible thanks to long-term, low-interest loans from the European Investment Bank (EIB), the bank of the European Union. The EIB invested about EUR 2.2 million in the renovation of these public facilities under the Early Recovery Programme (ERP). Each project also included a contribution from the state and local budgets of 20 percent of the total cost of the work.

“Following the armed conflict in the Donbas and the annexation of Crimea, the Azov Sea region has been facing inflow of IDPs and, as a result, many challenges in the social sphere,” said Jean-Erik De Zagon, Head of EIB Representation in Ukraine. “As the EU bank, we’re trying to adjust our activity to the needs Ukraine is currently facing, and we’re happy to furthermore focus our Early Recovery Programme on this region, following a request from the Ukrainian government. Our projects here directly impact the lives of ordinary local residents, including IDPs.”

In particular, the renovations of kindergarten № 41 "Barvinok" and kindergarten № 47 "Berizka" were completed in Melitopol. These facilities hadn’t been repaired for over 40 years. Old wooden doors and windows, damaged walls and roofs led to significant heat loss and failed to protect against damp. As a result, their room temperatures did not meet sanitary standards. The EIB allocated EUR 180,896 and EUR 143,175 respectively for major repairs to these buildings, including the insulation of façades, the replacement of old windows with new energy efficient ones, the insulation of roofs, and the installation of the buildings’ own heating systems. This will help make the premises warm, meaning the children get sick less often, as well as reduce heating costs and extend the life of the buildings.

In Prymorsk, a polyclinic building of the Central District Hospital was reconstructed. The premises of the existing polyclinic in Prymorsk were, contrary to sanitary standards, located in the same building as a hospital. In 2011 construction of a separate polyclinic building, with a capacity of 300 visitors per day, was started using funds from the local budget, but work was suspended when funding ran out. Only in 2019, thanks to EIB loan of EUR 1.3 million, was there an opportunity to complete the construction. The project involved a large amount of work: reconstruction of the foundations, the building of brick partitions and outbuildings, interior decoration, the replacement of doors, insulation of the roof and floors, the installation of stairways, insulation of the facade, the installation of heating systems, sewerage and electrical networks, the installation of two elevators, and the purchase of furniture and technical equipment.

At the same time, major repairs to the main building of the Central District Hospital are being carried out, with the work to be completed in late autumn. This involves the thermal insulation of the building, including its exterior walls and foundations, and the replacement of windows and doors (EIB loan – EUR 0.4 million).

The newly renovated cardiology department of Mariupol City Emergency Hospital had been waiting for an overhaul since 1972. The building was decrepit, had cracks in its walls and ceilings, and worn-out electrical wiring. The EIB provided a EUR 205,427 loan for major repairs, including the replacement of doors and the power supply heating, and ventilation systems, and the replacement of two hospital elevators. This will improve conditions for patients, reducing the length of patient visits and expanding diagnostic and treatment opportunities.

In total, 35 public facilities are being or will be restored under the ERP in Melitopol, Prymorsk and Mariupol. The contribution from the EIB to these projects is about EUR 34.6 million. Five facilities will open by the end of 2019. These are school № 1 and the first building of Primary Health Care Centre № 1 in Melitopol, the Central District Hospital and an apartment-type family hostel in Prymorsk, and the Korolenko Central Library in Mariupol. The remaining 26 facilities will be completed by the middle of 2021. To learn more, please see this infographic.

“The renovation of kindergartens and major repairs of hospitals mean that hundreds of kids will learn and play in warm facilities, and thousands of hospital patients will have proper conditions for their treatment,” said Dr. Annika Weidemann, Deputy Head of Delegation of the European Union to Ukraine. “I’m pleased to say that these are only a few of the many projects that residents of the Azov Sea region and beyond are already able to enjoy. This is a result of hard work and effective cooperation between the EU and Ukrainian partners at all levels.”

The conflict in eastern Ukraine and the obstruction of shipping through the Kerch Strait have seriously aggravated the social and economic situation in the east and south of Ukraine. Ukraine’s public and private infrastructure, including water and power supply systems, along with its educational and health facilities – already degraded by decades of underinvestment, neglect and inadequate maintenance – have been further damaged and put under strain by significant influxes of the internally displaced people (IDPs) from Crimea and the Donbas.

At the Ukrainian government's request, the European Investment Bank is providing financing for a first Early Recovery Programme (ERP) for 2015-2021. It is a multi-sector framework loan of EUR 200 million to local governments to recover critical municipal and transport infrastructure and improve living conditions for IDPs and their host communities in nine oblasts of Ukraine: the Ukrainian government-controlled areas of Donetsk and Luhansk oblasts, and Kharkiv, Dnipropetrovsk, Zaporizhzhia, Poltava, Odesa, Kherson, and Kyiv oblasts. The United Nations Development Programme (UNDP) helps to ensure the transparency of the programme’s implementation.

“The work being done under the Early Recovery Programme isn’t just restoring vitally needed infrastructure in eastern Ukraine – it is restoring hope in a better future and expanding the access to opportunities for thousands of people affected by the conflict in the region,” said Dafina Gercheva, UNDP Resident Representative to Ukraine.

As of September 2019, a total of 269 projects with a total cost of EUR 179.14 million have been approved. These include repairs to hospitals, schools and kindergartens, and to residential, administrative and public buildings. By the end of September, 18 sub-projects were completed in eight cities and towns in four oblasts of eastern Ukraine. Another 70 sub-projects of the Early Recovery Programme are in progress. Over 4 million residents of four oblasts of Ukraine, including nearly 600,000 IDPs and persons from other vulnerable groups, have already benefited or will soon benefit from the implementation of these sub-projects. To learn more, please see the ERP’s explainer and ERP’s infographic.

The European Investment Bank (EIB) is the European Union's bank. It is a long-term lending institution of the EU and is the only bank owned by and representing the interests of the European Union Member States. The EIB has been working in Ukraine since 2007. As of September 2019, the total EIB portfolio in Ukraine was EUR 5.9 billion for projects in energy, transport, environment and support for local government and private sector.

UNDP is the development arm of the United Nations. It has been working in Ukraine since 1993. Among other things, UNDP is helping to restore critically important social and economic infrastructure and the effective work of local governments in eastern Ukraine; creating jobs and spurring entrepreneurship among IDPs and host communities; and promoting peace and reconciliation. 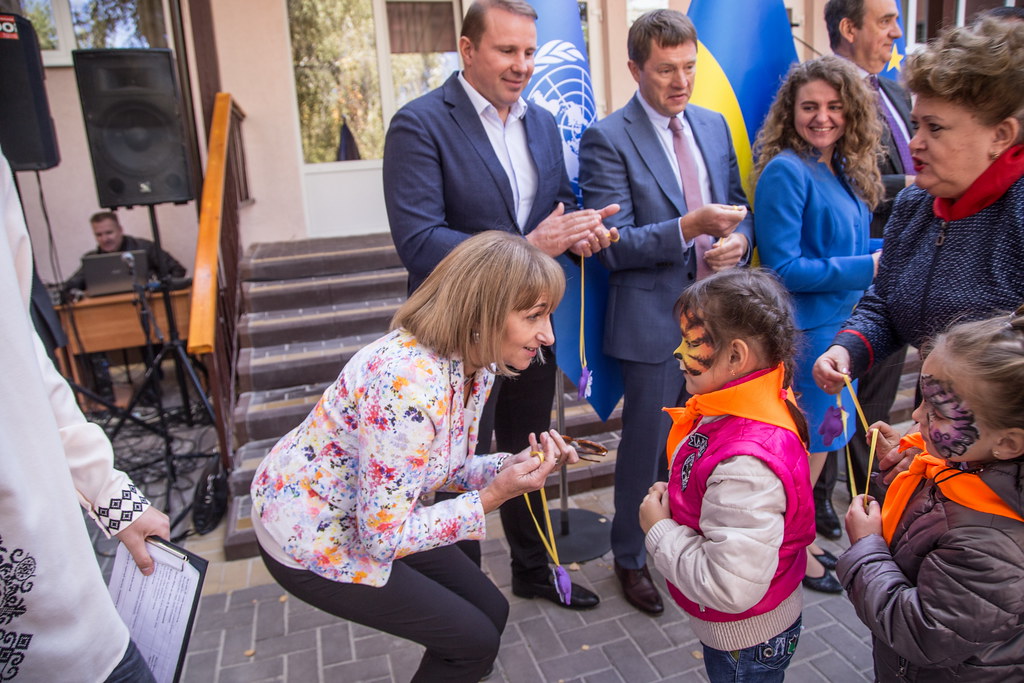 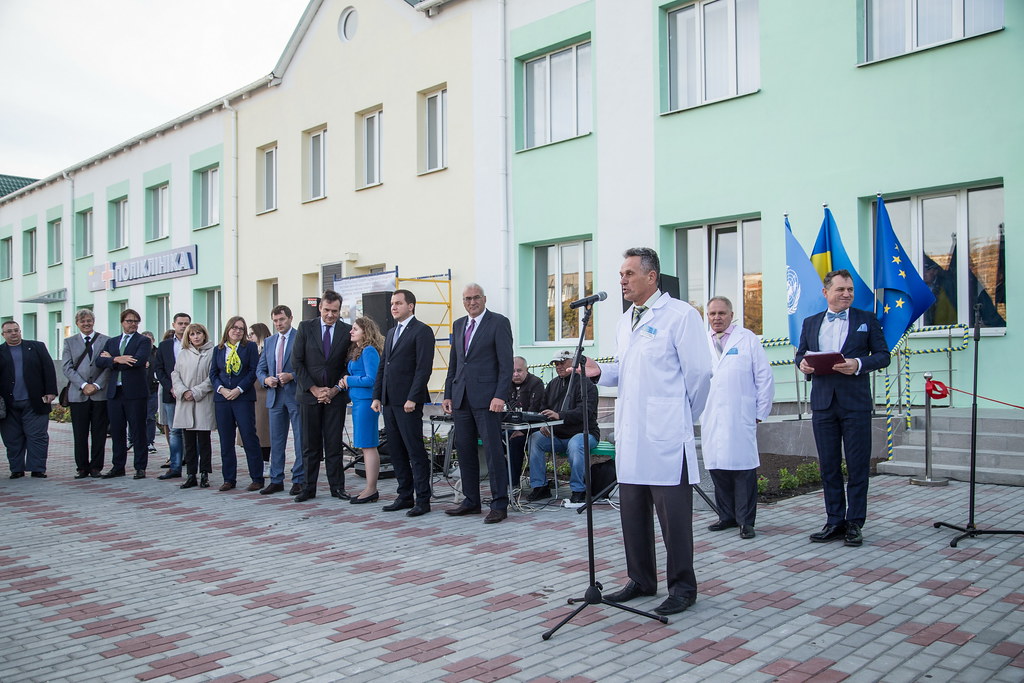 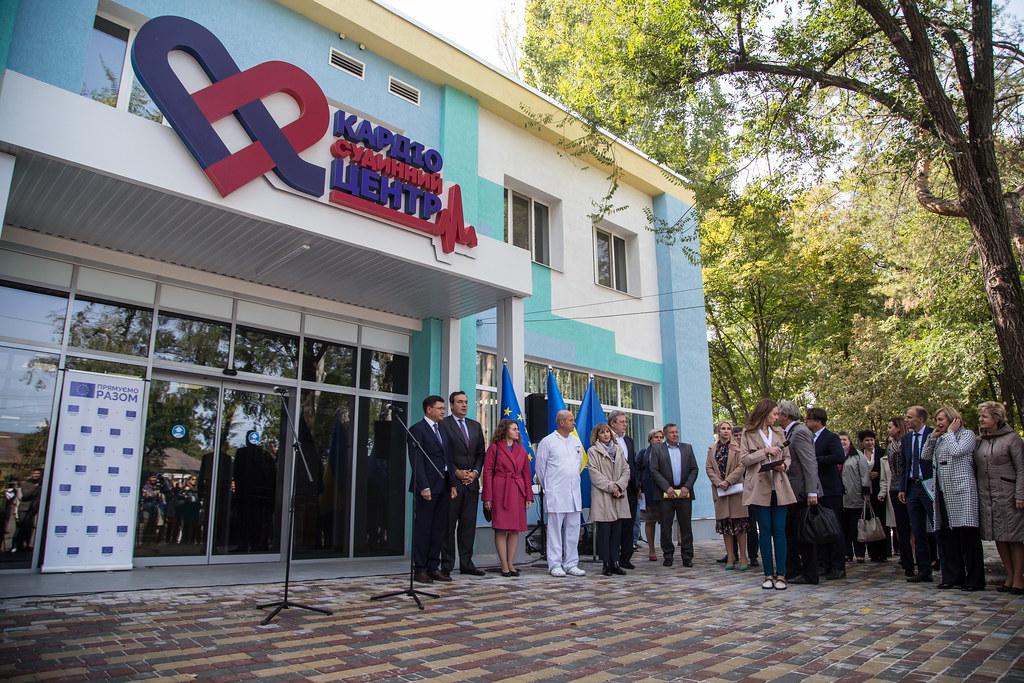