Kyiv, 30-31 January 2020 – More than 100 participants gathered in Kyiv for the annual conference of the Early Recovery Programme in Ukraine.

Representatives of the European Investment Bank (EIB), the European Union, UNDP in Ukraine, national and international counterparts are summarizing joint efforts and the progress made under the programme.

The opening remarks at the conference were delivered by Head of EIB Resident Representation for Ukraine Jean-Erik de Zagon, Head of Section of Local and Human Development at the European Union Delegation to Ukraine Frederik Coene, UNDP Resident Representative to Ukraine Dafina Gercheva and Deputy Minister for European Integration of the Ministry for Communities and Territories Development of Ukraine Yulian Chaplynskyi.

The preliminary results of a survey on the socio-economic impact of the Early Recovery Programme were also presented at the conference. Most respondents (70 percent) think that the recovery of social infrastructure facilities will help generate new jobs, 61 percent think it will produced better working conditions, and 70 percent think it will ease access to social services. The full results of the survey, developed by the Info Sapiens research agency, will be released soon on the UNDP’s website.

"The EIB, as the EU’s bank, pays special attention to Ukraine, which has been facing a very difficult situation in recent years," said Head of EIB Resident Representation for Ukraine Jean-Erik de Zagon.

"The territorial integrity of the country has been challenged, many Ukrainian citizens have been displaced from their home regions, and the Ukrainian economy needs to be further developed and reformed.

"Even though Ukraine is not a member of the EU, thanks to a special initative called Eastern Partnership it has received EUR 6.4 billion in loans from the EIB to implement a range of vital projects.

"Specifically, the EUR 200 million Early Recovery Program was developed at the request of the Ukrainian government to help the regions affected by the 'war' in eastern Ukraine. This program has a direct impact on the quality of life of people in eastern Ukraine – from housing for IDPs to conditions in schools and local hospitals."

Dafina Gercheva, UNDP Resident Representative to Ukraine said in her opening speech that the armed conflict in eastern Ukraine and its dire consequences have been badly impacting the lives of millions across the region over the past six years.

“The EUR 200 million Early Recovery Programme, funded by the EIB, is a timely and targeted response to the needs of people affected by the conflict,” Gercheva said.

“UNDP is pleased and honoured to be part of the successful implementation of the Ukraine Early Recovery Programme and the sustainable development of the country as a whole,” she added.

Eighteen social infrastructure facilities have been successfully repaired already: namely hospitals, schools, kindergartens, hostels and libraries, providing local communities with high-quality and accessible social services. Among the facilities are two kindergartens and two hospitals that opened in Melitopol and Prymorsk in Zaporizhizhia Oblast, and in Mariupol in Donetsk Oblast after large-scale renovation and modernization work, along with six medical facilities in Kharkiv that reopened after renovation work.

The renovations were carried out under the Early Recovery Programme as part of the UN Recovery and Peacebuilding Programme.

The Early Recovery Programme covers nine oblasts of Ukraine and extends to the Ukrainian government-controlled areas in Donetsk and Luhansk oblasts and the adjacent Kharkiv, Dnipropetrovsk and Zaporizhzhia oblasts, and to city councils in other oblasts countrywide that host significant numbers of internally displaced people, namely Kyiv oblast (apart from the city of Kyiv), Odesa and Poltava oblasts, where more than 20,000 IDPs live, and Kherson Oblast, which hosts significant numbers of IDPs from Crimea.

The European Investment Bank (EIB) is the European Union's bank. It is a long-term lending institution of the EU and is the only bank owned by and representing the interests of the European Union Member States. The EIB has been working in Ukraine since 2007. As of September 2019, the total EIB portfolio in Ukraine was EUR 5.9 billion for projects in energy, transport, environment and support for local government and private sector.

UNDP is the development arm of the United Nations. It has been working in Ukraine since 1993. Among other things, UNDP is helping to restore critically important social and economic infrastructure and the effective work of local governments in eastern Ukraine; creating jobs and spurring entrepreneurship among IDPs and host communities; and promoting peace and reconciliation. 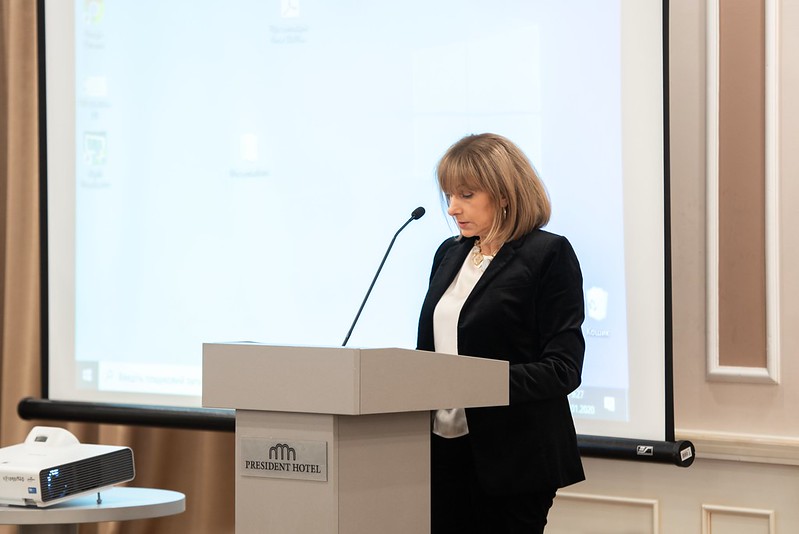